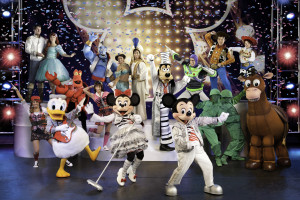 “One song can touch millions of people around the world and Disney has been at the beat of this concept for years by making music a main ingredient of storytelling,” said Producer and CEO of Feld Entertainment Kenneth Feld. “In Disney Live! Mickey’s Music Festival we are celebrating with the Disney characters to a soundtrack of the latest sounds and chart-topping hits. We want our guests to walk away with lasting memories and singing these unforgettable melodies long after they leave the show.”

Disney Live! Mickey’s Music Festival, featuring an all-star line-up of more than 25 Disney characters, begins with audiences watching a state-of-the-art video projection of the frenzy backstage which spills onto the stage as Mickey welcomes guests to his concert tour. Soon thereafter, they will be transported to a new world of hip hop beats, dizzying acrobatics, flying carpets and magical transformations with Aladdin, Jasmine and Genie. Underwater is where the crowd will meet up with Ariel, Sebastian and their nautical pals to groove to the reggae rhythm. And family and friends will stomp to the beat as Woody, Buzz and Jessie teach them how to boogie rodeo-style.

“We’ve created an environment where audience members will be able to connect with the Disney stars,” said Alana Feld, Producer and Executive Vice President of Feld Entertainment. “Within each concert moment are elements of personal interaction and the audience will be harmonizing, dancing, laughing and having an outrageously good time with the characters.”

· Director/Choreographer Fred Tallaksen Award-winning choreographer of Madonna’s “Sorry” video and the finale of her Confessions World Tour; in 2008, earned a Latin Grammy® in the Best Video category for Juanes’s “Me Enamora;” has choreographed for many TV shows, including “Modern Family,” “Outsourced” and “Wizards of Waverly Place;” skating consultant for “Austin Powers III-Goldmember;” and directed and choreographed for Disney’s Phineas and Ferb: The Best LIVE Tour Ever!

· Writer Jeremy Desmon’s credits include The Girl in the Frame, If You Give A Mouse A Cookie & Other Storybooks and Curious George Live!. He received the 2007 Kleban Award for excellence in Musical Theatre Bookwriting, and is also a recipient of the Dramatists Guild’s Jonathan Larson Fellowship

· Lighting Designer Sam Doty Assisted in the building and planning of every Feld Entertainment show since 2006, including Disney On Ice presents Worlds of Fantasy, Disney Live! Mickey’s Music Festival and multiple editions of Ringling Bros. and Barnum & Bailey® circus

· Music Director Stan Beard has arranged and written the musical score for numerous domestic and international Disney On Ice productions, and has worked in the recording studio with such luminaries as Barbra Streisand and Frank Sinatra

Feld Entertainment is the worldwide leader in producing and presenting live touring family entertainment experiences that lift the human spirit and create indelible memories, with 30 million people in attendance at its shows each year. Feld Entertainment’s productions have appeared in more than 70 countries and on six continents to date and include Ringling Bros. and Barnum & Bailey®, Monster Jam®, Monster Energy Supercross, Nuclear Cowboyz®, AMSOIL Arenacross, Disney On Ice, Disney Live! and Marvel Universe LIVE! More information on Feld Entertainment is available online at www.feldentertainment.com.

ABOUT DISNEY THEATRICAL GROUP (DTG) operates under the direction of Thomas Schumacher and is among the world’s most successful commercial theatre enterprises, bringing live entertainment events to a global annual audience of more than 19 million people in more than 50 countries. Under the Disney Theatrical Productions banner, the group produces and licenses Broadway musicals around the world, including Beauty and the Beast, The Lion King, Elton John & Tim Rice’s Aida, TARZAN®, Mary Poppins, a co-production with Cameron Mackintosh, The Little Mermaid, Newsies, and Peter and the Starcatcher.

Disney Theatrical Group also delivers live shows globally through its license to Feld Entertainment, producer of Disney On Ice and Disney Live! For over 30 years, Disney On Ice and Disney Live! have brought beloved Disney stories and characters annually to over 12 million guests in nearly 50 countries worldwide through productions such as Rockin’ Ever After, Dare to Dream, Treasure Trove, Mickey’s Rockin’ Road Show and Phineas and Ferb: The Best LIVE Tour Ever! In addition, DTG licenses musical titles for local, school and community theatre productions through Music Theatre International. 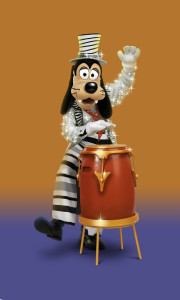