Lindsay’s Tea Party loves Disney and is super excited to share its latest show with you, Disney on Ice; Rockin Ever After! Full details are listed in the release below. And take just a minute to enter LTP’s chance to win a family four pack of tickets to see the show in San Diego!

WHAT: Get ready to rock out with some of the most magical idols of all in Disney On Ice presents Rockin’ Ever After, an all-new live production coming to San Diego! A cast of world-class skaters brings your favorite moments from Disney•Pixar’s BRAVE, Tangled, The Little Mermaid and Beauty and the Beast to life in a musical showcase that features the hottest tunes and talent from across the kingdom.

Jam to a Scottish jig as a group of royal contenders from the Academy Award-winning Disney•Pixar film, BRAVE, competes to win the heart of adventurous, sharp-shooting Merida, making her on-ice debut! Experience a show-stopping performance as Sebastian breaks out of his shell for one night only to make waves with Ariel. A chorus of harmless hooligans from Tangled unleashes musical mayhem when they get a visit from the sassy and spirited Rapunzel and her charming ally Flynn. And, get your feet moving as the Beast and his castle’s enchanted entourage take center stage in a spectacular show for Belle. It will be a rockin’ remix of royalty when Disney On Ice brings this superstar line-up to San Diego!

TICKETS: Ticket price levels are $17, $25, $45 (VIP) and $65 (Front Row)
Special Opening Night discount tickets available for only $10 each (not valid on VIP/Front Row seating)
All seats are reserved; tickets are available for purchase online at Ticketmaster.com, charge by phone at 800-745-3000 or in-person at the Valley View Casino Center Box Office.
*Tickets may be subject to service charges, facility and handling fees.

To discover more about Disney On Ice, go to www.DisneyOnIce.com, or visit us on Facebook and YouTube.

# # #
About Feld Entertainment
Feld Entertainment is the worldwide leader in producing and presenting live touring family entertainment experiences that lift the human spirit and create indelible memories, with 30 million people in attendance at its shows each year. Feld Entertainment’s productions have appeared in more than 70 countries on six continents and include Ringling Bros. and Barnum & Bailey®, Feld Motor Sports, Disney On Ice and Disney Live!. 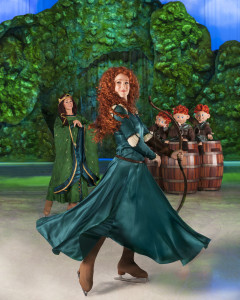